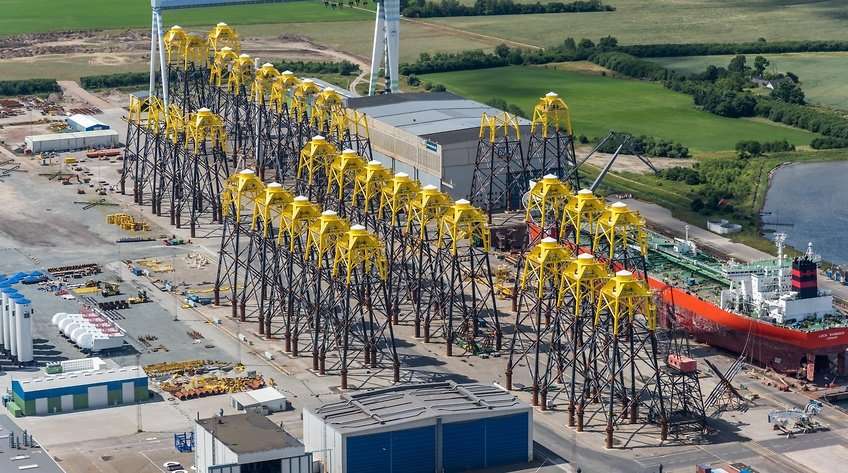 With over €27 million. DKK in backing, University of Southern Denmark and a number of other companies will develop robot and automation technology for processing large workobjects within construction, heavy fabrication, shipbuilding and energy sectors.

The reaction was gawking and slightly skeptic when the deputy director of Odense Steel Shipyard, Torben Andersen, introduced welding and cutting robots at Lindø shipyard back in the mid-1980s.
Nevertheless, this venture became the kick-off for a thriving robot industry on Funen, which today exports robots for close to euro €1.34 billion and has created thousands of jobs on Funen.

Although the robot industry was nurtured at the shipyard in Munkebo northeast of Odense, there are very few Funen robots today that work with large objects in shipbuilding, construction or offshore. Instead, the robots have been moved indoors on the factory floor, where they handle smaller objects in controlled environments.
In the meantime the University of Southern Denmark (SDU) has joined forces with a large number of companies to revitalize Danish shipbuilding on Lindø and create new robot and automation solutions within construction, as well as the maritime area and the offshore sector. The work is anchored in the Center for Large Structure Production (LSP), which SDU heads together with 15 companies, and which has a budget that is expected to reach €27 million. over the next five years.

»Today, the handling and processing of large objects often requires large facilities and a lot of working hours, most of these processes and tasks are performed manually due to lack of automation solutions. When an object can be 20 to 30 meters in length, the number of square meters quickly adds up.

The focal point of the center will be to develop robotic solutions where tools and machines move, while the object itself remains stationary. In fact, it is a bit like the old dock at a shipyard, «

says Christian Schlette, professor at the Maersk Mc-Kinney Møller Institute at the University of Southern Denmark, who will head up the work with the new center.

The Large Structure Production Center has initially zoomed in on three projects: Robot welding of offshore foundations, 3D printing in concrete for the construction industry and the development of a robot cell for shipbuilding.
A key point will be the construction of a hangar in Lindø Industrial Park at the Port of Odense, where a part of the companies that are part of LSP can do production, e.g. Bladt Industries and Fayard.

The core of the hangar will be a new large gantry that is 20 meters wide, 30 meters long and 10 meters high. It can move freely over the object with tools or robots mounted and is today equipped with four large robots for processing large objects.
»It is suitable for modular solutions, which can be exported to all possible and impossible workplaces, because it comes as a rectangular box solution. If the objects become too large, we will have to switch to mobile robot platforms, but this presents a number of new security challenges and places stricter requirements for integration at, for example, the construction site, « says Christian Schlette.

With the object at the center

The idea is to go from a linear production, where one continuously process an object, to make the object the focal point and instead let machines and equipment be flexible, either by connecting them to the gantry or by using completely free-standing mobile robots, that can crawl upon the large workobject.

At Inrotech in Funen, a company which develops welding robots for ships, offshore foundations and wind turbines, they have experience with both gantries and mobile robots.

»We love big objects and heavy fabrications! Until today, we have delivered stand-alone solutions, either with gantries or with mobile robots, which are then adapted to the individual shipyard or the individual factory. With the new center on Lindø, we will for the first time have the opportunity to participate in developing one comprehensive system and take part in reviving Danish shipbuilding, «says CEO Gert Jørgensen.

Inrotech’s welding robots are in many ways a good example of how the legacy from Lindø has been carried up until today. Back then, robots were developed on Lindø with one special characteristic: off-line programming, where one could program the robot with CAD files without physical contact and thereby reduce the changeover time. Inrotech has taken automation a step further, their robot instead scans the object and matches it with data from the many thousands of welds that Inrotech’s robots have previously carried out. In this way, the robot can by itself pinpoint the areas where it needs to weld and calculate tolerance and time by itself.

Inrotech welding robots are composed of well-known components, for example robots from Kuka or Fanuc, which are then combined with scanners and sensors from, for example, Sick or Leuze and welding equipment from Kemppi, and then the system is tied together by Inrotech’s software.

The solution looks quite different from the complicated welding robots that were developed on Lindø in the 1980s and 1990s by, among others, Niels Jul Jacobsen, who founded and later sold the mobile robot manufacturer MiR for €228.5 million.
One of his first and most famous robots, the snake robot, crawled through manholes on container ships on Lindø to weld the inside. It required 21 motors to control the 12-axis manipulator-system.

In 2009, shock waves passed through Funen and Danish industrial companies, when A.P. Møller-Mærsk decided to close the Lindø shipyard. Almost 100 years of shipbuilding were now over, and 2,600 jobs were lost when the last ship left Lindø ten years ago. Production was then relocated, to South Korea in particular.

However, already in the years leading up to the shutdown, a large number of robot pioneers from the 1980s and 1990s had been moving away from shipbuilding to the automation of small items on the factory floor.
But shipbuilding has not completely disappeared from Lindø. The repair yard Fayard and the consulting company Odense Maritime Technology – which has also grown out of Odense Steel Shipyard and today is developing a standardized ferry solution for the small Danish islands – are also participating.

The new center will thereby not only be a research and development center that will teach construction, the maritime sector and the energy sector to use robots. It will also be a place where Danish robot manufacturers will be able to obtain new knowledge from experienced companies within production of large and heavy entities.
»We have previously given away too many competencies – now they have to come back. ‘Make Lindø great again’ may sound a bit optimistic, but our ambitions are to lay the foundation for Lindø 2.0, so that Denmark can once again become a leading shipbuilding nation. For us, it is important to think big,« says Gert Jørgensen.

Although factory-automation and the production of large objects today take place very differently, the two areas have moved closer to each other in recent years. The need to be able to produce with low volume and high variance means that the industry is slowly moving away from line production.

»The need for flexibility is increasing, and this means that the individual product is increasingly becoming a focal point, instead of the line-based production. The way things are lining up, we believe that it is possible to regenerate Danish shipbuilding with robots and automation, « says Christian Schlette.